Synopsis:
Since her mother died when Mia was a child, her dad has been her best friend and her idol. Now, the cancer he survived years before is back, and this time there’s no fighting it. To make matters worse her dad’s last request is for Mia to leave him and visit her mother’s family on the Italian island of Ischia so she doesn’t have to be there at the end.

Arriving at the sun-soaked island, Mia is embraced by the warm, crazy family she doesn’t know. While she waits for the phone to ring with the dreaded news, Mia desperately looks for a connection to the mother she never knew. Stumbling upon an antique shop run by the charming Antonio and his grouchy but handsome grandson Salvatore, she throws herself into helping with the shop restoration. As Mia and Salvatore’s bickering soon turns to chemistry, will she risk having her heart broken when she knows what’s waiting for her at home? 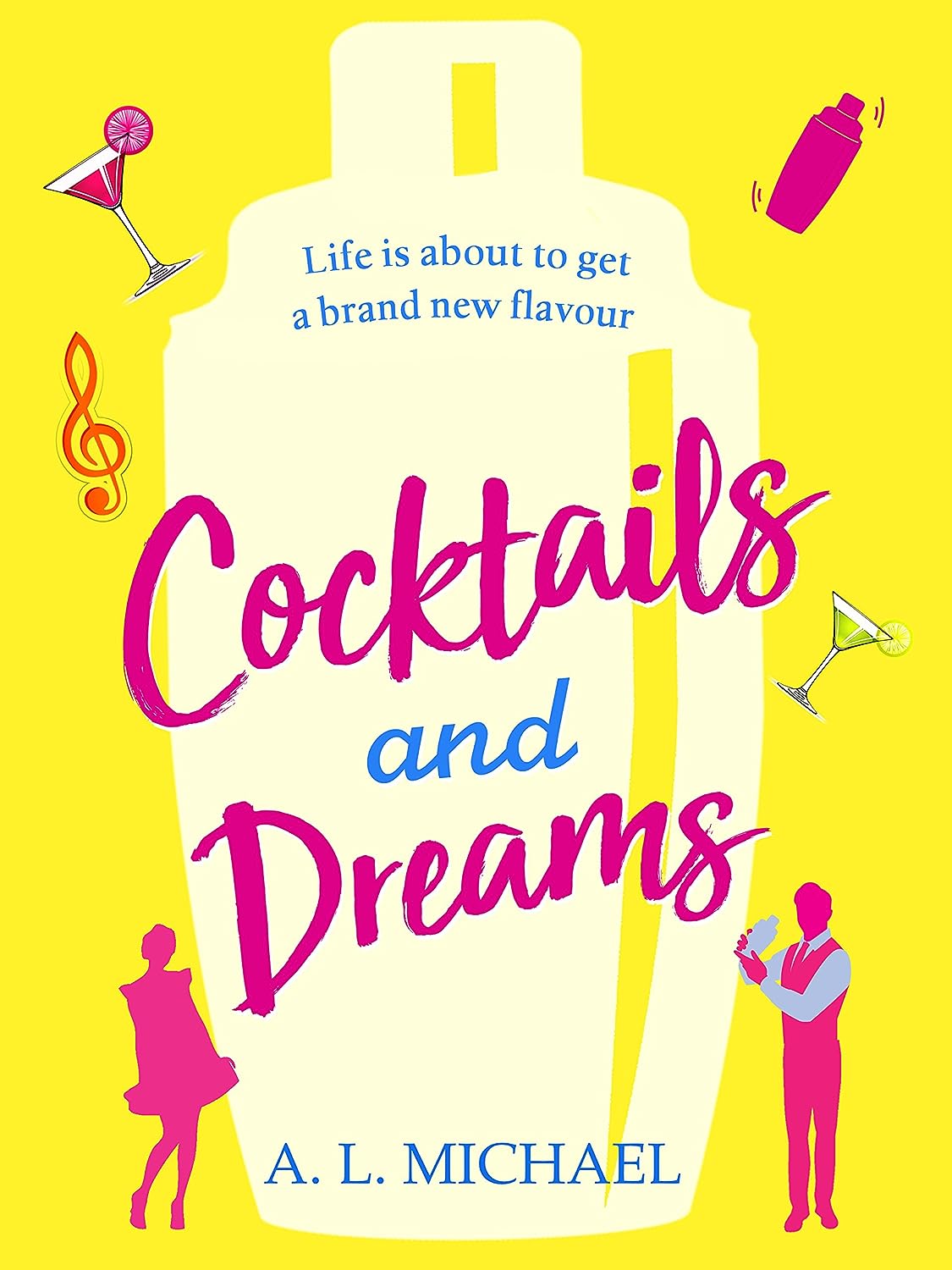 But loving someone means deciding to let them hurt you when they leave.

If you already have read Cocktails and Dreams, you knew Mia instantly as Savannah’s best friend. She was gorgeous, tough and a very opinionated woman. She was not afraid to say what she thought even if it caused her trouble. But behind all bravado, she was broken, hurt and alone.

When Rob, her father asked her to go to her maternal family in Italy, she learned more about her mother, Isabella. She found out that her mom left with her father to be happy, to follow her dreams and live a life with the man she loved. From the stories told by Allegra, Antonio and even her Nonna, she realized that she was like her mother, impulsive, stubborn but also passionate and kind who always care for other people.

And then there she met, Salvatore — the attractive but rude and condescending lawyer who went back home to nurse his fake wounds and chose to take over his grandfather’s old antique souvenir shop. Even with a bad start, Mia and Salvatore were able to get to know each other as they work on a project at Antonio’s shop, but will Mia let him bring her coffee every morning?

I understood why Rob chose to send Mia to Italy instead of being with her on the last few moments of his life. He wanted Mia to remember him as a strong man who was always there for her and not the weak, sick and dying version of himself. Rob was the kind of father who was selfless and put his child’s interest before his own.

Mia’s character was complex yet relatable. Yes, she was cold, curt and always trying to push people away but I think she was only afraid to trust because she believes she will just end up being alone and unwanted. So, she used anger to survive, to go on every day even if it was hard. I knew that feeling and sometimes the fire that comes from it is what keeps us alive.

While Mia and her Nonna have the same way of dealing pain, I know they were just putting an armor because they don’t want other people to perceive them as weak. They were afraid to accept the truth that they need other people to figure out how to be happy and be forgiving.

With the closing credits nearing to an end, I love how Mia changed and opened up to her family. She finally understood Marjorie that they were not that different from each other. Her life immensely changed with the death of her father but was totally filled with new people who are always there for her no matter what.

A.L. Michael has the skill to write significant, well-developed characters where they have their own story to tell and own message to give. They have this certain rare type of connection that was woven together by emotions like anger, pride, guilt, and sadness; they were able to put the missing pieces back in their lives’ puzzle.

Prosecco and Promises is a beautiful piece of tale about loss, grief and second chances. It is a story that translates history, culture and tradition into a personal, honest experience of love, new beginnings and happy endings.

Thank you to NetGalley, Canelo and A.L. Michael for providing me an eARC in exchange for a fair and honest review!

Hi guys! I’m so happy to share today’s Behind The Pages with A.L. Michael! She’s the author of Cocktail and Dreams, the first book in The Martini Club Series followed by Prosecco and Promises and a third book, Martinis and Memories forthcoming 2018.

So before you go, read the interview I had with A.L. Michael and know more about her and her new book.

Congratulations to your latest novel, Prosecco and Promises. I’ve known Mia on your book, Cocktails and Dreams as Savannah’s best friend. What drew you to write her own story.

I’ve got this thing about the best friend characters – they always think they’re not the hero. In life, we have those people who have adventures, and the others who don’t feel like they’re interesting enough to be a main character, even in their own lives! Mia isn’t your typical romantic heroine – she is abrupt, and occasionally rude, and she’s not afraid to be the bad guy. But I think those stories need telling too, because she’s strong and dealing with something a lot of people have been through.

Prosecco and Promises was set on Italy. Why did you chose it as a setting for this story?

I love Italy, I’ve been back so many times. The way of life, the attitude, the fact that it is responsible for three of my favourite things (pizza, wine and ice cream), I just think Italy is where magic happens. And I wanted Mia to be in the bosom of a family that wouldn’t put up with her attitude, and Italy always feels like that to me. Like it’ll force you into just going with the flow.

Mia can be a pushover at times but she’s also funny and an honest friend. Do you agree? If you had to describe her in three words, what would it be and why?

I don’t know if I’d consider her a pushover – she sometimes does things she doesn’t want to do, just out of love for other people, but she’ll sure moan about it. I think she can be funny, and she always tries her best to be honest with people even when she doesn’t know how. I’d describe her as abrupt, vulnerable and loyal.

What is a characteristic that you share with one of the main characters in Prosecco and Promises?

I’m probably like Allegra, Mia’s aunt, in that I want to feed people and make them feel loved and looked after.

Do you ever project your own life experiences onto your characters?

Not in any big ways – the main idea of a proud father insisting his daughter not see his weakness, not see him as less than he was, I know a lot of people like that. I could put a few people into Mia’s dad’s position quite easily. And of course, Salvatore’s idea of love, that it’s as simple and wonderful as wanting to bring someone a cup of coffee every day for the rest of your life – that’s absolutely my philosophy.

What do you hope readers take away from Prosecco and Promises?

I know a lot of people who have already read it have shared their feelings of loss in their own lives, as well as people going through illness. I hope they take away an understanding that it’s okay to be vulnerable and in pain, that it’s okay to feel loss, but maybe at the end they can feel a little hope too, for life with and after loss, like Mia does.

You have already written ten novels. Can you tell us a little something about your first published book? How was your journey looked like?

My first book was called Wine Dark, Sea Blue and it was very different to my women’s fiction novels. It was another story of grief, but this sharp and jagged, sharing the story of a party girl in London who couldn’t connect with people. I’ve always found those themes to be interesting. Love and loss is what binds us, after all. I was published by Stairwell Books after I sent a short story to a magazine they took over. They asked if I had anything else and I did. After that, I saw a tweet asking for submissions, so I went for it, and that got the ball rolling.

What are you working on right now? Can we expect another book from The Martini Club series?

I’m working on the third book in The Martini Club, which will be Bel’s story. She’s a smoky siren with a less than perfect past, but like the other two she’s gutsy and brave. I hope everyone will love her. I’m also working on a different concept for my agent, so there’s lots going on this year!

What advice would you like to give to new writers, someone who is just starting out?

Read loads, write as much as you can, and don’t be afraid to let it be rubbish. The first draft is just you telling yourself the story. So many people quit because they think they’re not good enough, but they’ve only just got going. I never sat there and thought I was the most talented writer, I just knew that I would work as hard as anyone else, and never stop!

A.L. Michael is a writer, currently living in Watford. She has a BA in English Literature with creative writing, and an MA in Creative Entrepreneurship, both from UEA. She also has an MSc in Creative Writing for Therapeutic Purposes, where she researched the usefulness of therapeutic writing with those in recovery from eating disorders.

She writes books about women who are trying to figure out their place in the world, and who aren’t afraid to make mistakes. She is the author of 10 novels.

When she’s not writing novels, she’s working as a content writer, practicing yoga, looking at puppy videos or drinking too much red wine.