Synopsis:
In a star system dominated by the brutal Vathek empire, sixteen-year-old Amani is a dreamer. She dreams of what life was like before the occupation; she dreams of writing poetry like the old-world poems she adores; she dreams of receiving a sign from Dihya that one day, she, too, will have adventure, and travel beyond her isolated moon.

But when adventure comes for Amani, it is not what she expects: she is kidnapped by the regime and taken in secret to the royal palace, where she discovers that she is nearly identical to the cruel half-Vathek Princess Maram. The princess is so hated by her conquered people that she requires a body double, someone to appear in public as Maram, ready to die in her place.

As Amani is forced into her new role, she can’t help but enjoy the palace’s beauty―and her time with the princess’ fiancé, Idris. But the glitter of the royal court belies a world of violence and fear, and one wrong move could lead to her death…

First things first, I love Mirage’s lush and stunning cover that truly catches a reader’s eye and I personally think, captures the vibe of the story’s setting and world building, as well as the magnificent, rich culture and history of the Andalaan people. The cover perfectly fits the book’s description and truly sets the tone of a sci-fi, fantasy novel. However, did it met my expectations?

📑 The true villain is not who it appears to be

At the beginning of the story, Maram’s character was deeply cruel and selfish. Yet, I find her extremely important not just to Amani’s character development but to the story’s overall plot as well.

She was despised by her own people, hated by her own sister and most of all neglected by her own father. And the reason why she treated Amani the way she did was rooted in how King Mathis shaped her into a hateful person that Maram learned to turn her sadness and loneliness into atrocity.

That being said, I fully understood that Maram is not the villain in this story but rather, King Mathis who manipulated her and would do everything just to stay in power.

📑 The ultimate SHIP between Amani and Maram

I admit that I swooned over the tragic romance developed between Amani and Idris because I’m weak like that! But as I came to sit through the end to truly digest everything that happened and delicately dissect my feelings over the significant, memorable scenes in the story, I realized how I appreciate the friendship and sisterhood that grew between Amani and Maram more than anything else.

Amani’s strength to view everything in a better, positive perspective was the reason how she was able to break the walls Maram built for herself. The shift started slow yet it opened doors to a new and kinder Maram. She needed someone like Amani who will watch over her and protect her like what elder sister does.

Considering this, even the two hadn’t settled the real score (because there’s a score, alright?) between them at the end of the story, it’s clear how Maram cares for Amani and they both knew that without vocally saying it.

📑 The ending answers the beginning

I’m trying to make this as clear as possible without revealing any spoilers but if you will going to read the ending, you will realize how the connection has strongly resonated with the first chapter of the story. It was like a mirror that practically answers the question: ‘What was Amani’s purpose of being captured by the Vath? What was she called for?’

You do not kneel or bend, I told myself. To anyone. You continue…I could not give up hope.

And since the signs were all there for readers to know even before Amani’s relationship with Idris or her friendship with Maram started, it was pretty obvious how her character would turn into a game changer.

The idea of rebels in the galaxy with droids got me totally hyped. Given how the slow pacing provided me the chance to recognize the change in Amani and Maram’s characters; the full action that I’m anticipating was actually not there, other than that scene at the end where Amani saved Maram’s life.

Nevertheless, even if it was not as page-turner as how I assumed, the lack of it was filled by the details in the world building and the connection built between each character.

Though the story is not how I expected it to be, I’m still looking forward to read the sequel. And since this is only an introduction to what may happen next, hopefully, readers would learn more about the other tribes that were mentioned in the story who could possibly work together on an impending war against the rule of the Vath.

Altogether, I love how the characters left me a lasting impression in a world parallel to what is currently happening on our own—conflicts, division, oppression, war, and deaths. And even there was no end to fear, the story displays a great sense of hope that we are stronger together as long as we are there for each other.

Mirage is timely, important and a celebration of freedom that reflects an immersive and vibrant culture, journeying with hope and empowerment against the brutal reality of politics.

Special thanks to Aimee, Always for organizing this fantastic blog tour and thank you to NetGalley, Flatiron Books, and Somaiya Daud for providing me an eARC in exchange for a fair and honest review!

Somaiya Daud was born in a Midwestern city, and spent a large part of her childhood and adolescence moving around. Like most writers, she started when she was young and never really stopped. Her love of all things books propelled her to get a degree in English literature (specializing in the medieval and early modern), and while she worked on her Master’s degree she doubled as a bookseller at Politics and Prose in their children’s department.

Determined to remain in school for as long as possible, she packed her bags in 2014 and moved the west coast to pursue a doctoral degree in English literature. Now she’s preparing to write a dissertation on Victorians, rocks, race, and the environment. Mirage is her debut, and is due from Flatiron Books and Hodder and Stoughton in August 28, 2018. 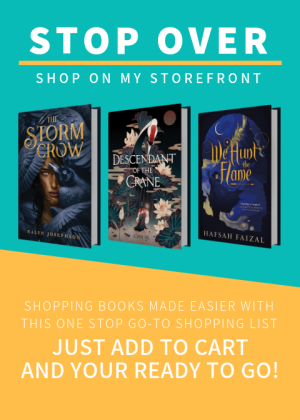